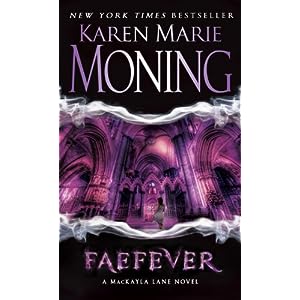 ﻿
After being kidnapped and nearly murdered by a deranged vampire, Mac has now come to a very strong realization.....she needs to start kickin some ass and now! Though this is easier said then done, it also doesn't help that she's stuck in the middle of two very mysterious and sexy men. In one hand is Barrons, Mac knows he's tall, dark, always happens to be in the right place at the right time, and well, that's about all she knows. The fact that he is SO mysterious is starting to get on her nerves...bad! In the other hand is V'lane, a death-by-sex Fae prince who swears he has only good intentions towards Mac, and wants to become her friend. Right, since when do death-by-sex Fae want human friends? Never.
With Halloween fast approaching, and the thin veil between the Fae & human world on the verge of being torn down, Mac feels that she needs to do something to help. She doesn't know where to go or who to trust, but she can't just sit around and twiddle her thumbs.
Deciding to go to the abbey to help her fellow Sidhe-seers, instead of going with Barrons to the countryside,might not have been the wisest choice, but it was the choice she made. Just as Mac steps out to head towards the abbey her Sidhe-seer sense starts jumping off the radar, and not in a good way, she can feel it down to her core that this is bad, real bad. Now all she sees are mobs, and riots in every direct. With the city being turned into a Dark Zone right before her eyes all Mac can think is that this is a dream, a sick, twisted, crazy dream.....or is it?
In this particular book in the series, there are a lot of questions that you might have asked in the previous two that are answered. It still has it fair share of sexual tension, and action, but just not as much as I had hope for. Like I said, there's a lot of questions answered, and talking going on. The ending is fabulous and sets it up for the next book to blow it WIDE open. I can't wait to read Dreamfever next to see how Mac's story unfolds!
Posted by Jessica Hansen at 1:19 PM