{Blog Tour: Review + Giveaway} Hari in All the Wrong Places - By Andrew Buckley 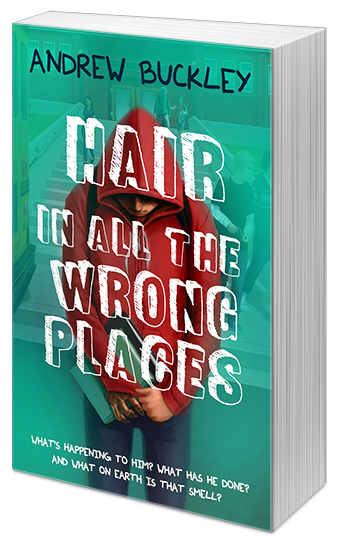 
What has he done?

What’s happening to him?

And what on Earth is that smell?

For Colin Strauss, puberty stinks. Blackouts, hallucinations, and lapses in memory are the perils of growing up werewolf.

Worse than that, Colin worries he might have had something to do with the recent attacks on the townspeople. He may have eaten a person. It doesn’t matter that it’s someone he doesn’t particularly like. What kind of boy goes around eating people?

Foolishly, all Colin can think about is how Becca Emerson finally kissed him for the first time. Yep, hormones are afoot. Yikes!

But girls will have to wait. Colin better get himself under control before someone else ends up hurt or worse . . . dead.


It's been a LONG time since my last Were read, but my love for all things werewolf has come back in full force!

Colin's life hasn't been the easiest, now living in a small town things can't seem to get any worse for him.....Suddenly his emotions are on steroids, his senses feel like they're on fire....even periods of time are missing. Colin just wants to know what the heck is going on, and when he finally finds out what's happening to him he takes it like any teenage boy would...AHHHHHHHHHHHHH!

One of the things I absolutely loved about this entire book was that there wasn't a single predictable moment, not one. Trust me, there were a couple of times when I caught my self thinking, "...and THIS is when the bad guy jumps out!", but I was wrong. Every page was an unexpected twist, each character blew my expectation completely out of the water. Especially with Colin.

By the end of this book I would say that I was 100% committed to every character, no matter how small their roll. Andrew has a truly magical way with words, his character development is thought & it truly shines through in every single word.

Now my biggest issue....I have to sit here....patiently....waiting to see where Andrew takes Colin and the crew....if anywhere. (fingers crossed) 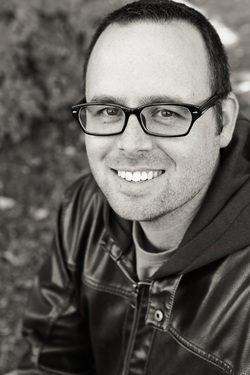 Andrew Buckley attended the Vancouver Film School’s Writing for Film and Television program. After pitching and developing several screenplay projects for film and television, he worked in marketing and public relations, before becoming a professional copy and content writer. During this time Andrew began writing his first adult novel, DEATH, THE DEVIL AND THE GOLDFISH, followed closely by his second novel, STILTSKIN. He works as an editor for Curiosity Quills Press.
Andrew also co-hosts a geek movie podcast, is working on his next novel, and has a stunning amount of other ideas. He now lives happily in the Okanagan Valley, BC with three kids, one cat, one needy dog, one beautiful wife, and a multitude of characters that live comfortably inside of his mind.
Andrew is represented by Mark Gottlieb at the Trident Media Group.
Website | Twitter | Facebook |Goodreads

Email ThisBlogThis!Share to TwitterShare to FacebookShare to Pinterest
Labels: 5 Star, Andrews Buckley, Chapter By Chapter Promotions, Giveaway, Hair in All the Wrong Places, Review, YA