{Blog Tour: Review + Giveaway} The Masks of Under Series - By Kathryn Ann Kingsley 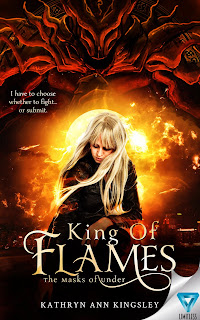 KING OF FLAMES - By Kathryn Ann Kingsley
(The Mask Under #1)
Release Date: March 5, 2019
Publisher: Limitless Publishing, LLC
Everything about my life has been pretty normal working as a forensic autopsy technician. Until the day I woke up with a mysterious symbol tattooed on my arm.
Suddenly normal no longer existed. The barrier between Earth and a world called Under, dissolved...
Now I’m trapped with dozens of other people. Held prisoner by the creators of myths and legends, where the realm is ruled by two masked kings who want to turn us into creatures like them.


But even though I didn’t choose to be here, this new world manages to pull me deeper, affecting me differently than other humans. Unfortunately King Edu, also known as the King of Flames, notices this and I’m now considered a threat.


If I want to survive King Edu and the dangers of Under, I need to escape. The only problem is, there’s another masked king who seems to have an interest in me. Aon, the King of Shadows, wants me here in this world, and he wants me alive.
I just need to figure out why.
READ FOR FREE ON KU!
Goodreads, Amazon, Kindle, B&N, TBD
=============== 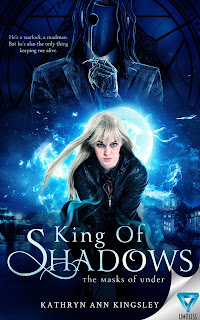 KING OF SHADOWS - By Kathryn Ann Kingsley
(The Masks of Under #2)
Pub. Date: March 26, 2019
Publisher: Limitless Publishing
Some call him a madman. Others call him a warlock. Both are true.
But if it wasn’t for Aon, I’d be dead. I was mere seconds away from dying by Edu’s hands when the King of Shadows appeared in a flash of lightning, saving me from Edu’s murderous plans.
Now I’m under his protection, living in his home. The more time I’m forced to spend with him, the more I start to piece together the puzzle of why Aon and Edu are at war.
Despite how everyone else seems to hate Aon, there’s something that pulls me towards him—like gravity, refusing to let go. My heart is telling me to believe what he says is true, yet there’s this prickle of warning in the back of my skull cautioning me against falling for the King of Shadows.
In the world of Under trusting the wrong person can get you killed. Only the strong survive out here, and that’s what I intend to do.
Survive.

READ FOR FREE ON KU!

The chemistry that there was between Lydia and Aon was underling in Kind of Flames, it was like the a slow burning fire that I was just waiting for someone to throw some gas onto! Well, guess what, someone did that in book #2! BOOM!

One thing that I enjoyed was how much Lydia evolved, from the beginning of the 1st book to the end of the second, she didn't just learn to survive, she found a purpose. Lydia did struggle with a few different issues through these books, and I was worried for a minute she might now grow, but with her new sense of purpose and now knowing who she can trust pushed her along, things are going to get so good in her future!

The series is going to be a total of 6 books, and that poses a problem, since there are only 2 currently out....why do I have to wait soooooo long for the things I want?! Ugh, life! 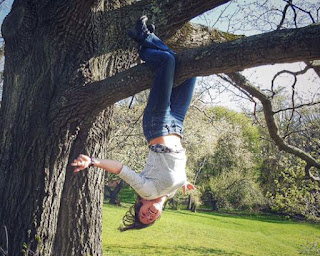 Kat has always been a storyteller.
With ten years in script-writing for performances on both the stage and for tourism, she has always been writing in one form or another. When she isn’t penning down fiction, she works as Creative Director for a company that designs and builds large-scale interactive adventure games. There, she is the lead concept designer, handling everything from game and set design, to audio and lighting, to illustration and script writing. Also on her list of skills are artistic direction, scenic painting and props, special effects, and electronics. A graduate of Boston University with a BFA in Theatre Design, she has a passion for unique, creative, and unconventional experiences. In her spare time, she builds animatronics and takes trapeze classes.

3 winners will receive ebooks of KING OF FLAMES & KING OF SHADOWS, International.
a Rafflecopter giveaway
Posted by Jessica Hansen at 9:10 AM

Are you tired of being human, having talented brain turning to a vampire in a good posture in ten minutes, Do you want to have power and influence over others, To be charming and desirable, To have wealth, health, without delaying in a good human posture and becoming an immortal? If yes, these your chance. It's a world of vampire where life get easier,We have made so many persons vampires and have turned them rich, You will assured long life and prosperity, You shall be made to be very sensitive to mental alertness, Stronger and also very fast, You will not be restricted to walking at night only even at the very middle of broad day light you will be made to walk, This is an opportunity to have the human vampire virus to perform in a good posture. If you are interested contact us on Vampirelord7878@gmail.com