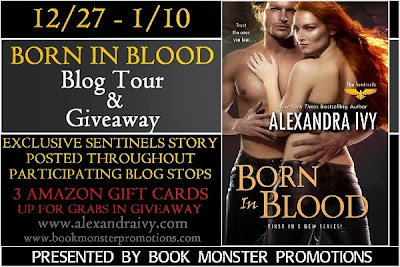 SQUUUUUEEEE!!! I am SO pumped to be able to introduce you guys to Alexandra Ivy's lastest masterpiece, Born In Blood!!!

Not only do you get a drool over this beautiful cover, BUT, I get to share part of a Sentinel Story with you!!! 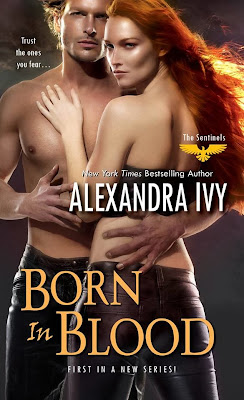 Lies The Kiss Of Death Unlike the other "high-bloods" in Valhalla, Callie Brown considers her abilities a gift, not a curse. But when she reads the dancer's final thoughts, she senses a powerful presence blocking her vision. This is no ordinary homicide. This is the work of a legendary necromancer who controls souls. A ravenous force that will put Callie's skills to the test, O'Conner's career at risk, and both their hearts on the line. . .literally.

Each blog on this tour was given a different section of the Sentinel Story.....ready for my part of the story??


Which was the only reason she hadn’t slammed the door in Anton Valik’s face the first time he’d shown up, claiming he was a representative from Valhalla.  He was a part of some mysterious order that tracked down high-bloods and he promised there was a place for Charlie where he would be surrounded by people who were like him.


Over the next month Anton had been a regular visitor to her small apartment on the outskirts of Boston, his exotic beauty making her forget how to breath as he’d gently put Charlie through a series of tests and, at the same time, earning his trust.  Eventually he’d invited Charlie to travel to Valhalla where he could learn how to control his powers.


Jayne couldn’t deny her brother the opportunity to fulfill his destiny.  Even if it ripped out her heart to have him taken away.  So she’d dutifully brought him to Valhalla and watched him walk away.  But she couldn’t leave.  Not until she was absolutely, positive they would treat him well.


Now she struggled to keep her knees from buckling in abject terror.


Then, without warning, the crowd of Sentinels parted and a tall, man strolled toward her.


Her heart slammed against her ribs at the sight of the painfully beautiful high-blood.  It wasn’t just his shoulder-length, dark hair that framed his finely chiseled face that sent electric jolts of awareness through her.  Or the pale eyes that shimmered like silver in the moonlight.   Or even the hard, utterly lickable body that was shown to advantage beneath the thin, v-neck sweater and black silk slacks.


It was the way he looked at her as if he were seeing straight to her soul.

Now take all this amazing-ness and enter the giveaway below!

Here's what you could win:

I love this short story introduction. Great Tour, I just wish I'd got the first question on the Rafflecopter right...Oh well. We've got Callie & Duncan in the book blurb and now Jayne and Anton in the short story...can't wait!

I can't wait to read this series! It sounds like a great read :) Thanks for sharing :) Happy Reading! :)