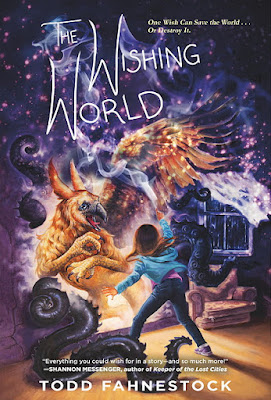 In the Wishing World, dreams are real. You can transform into your own hero, find wild and whimsical friends, and wield power as great as your imagination. But Lorelei doesn't know about any of that. All she knows is that a monster took her family.
It happened during a camping trip one year ago. Hiding inside the tent, she saw shadows, tentacles and a strange creature. By the time she got up the courage to crawl outside, the monster--and Lorelei's mom, dad, and brother--were gone.
Lorelei is determined to find her family. When she accidentally breaks into the Wishing World, she discovers a way. It's a land more wonderful than she could have imagined, a land of talking griffons, water princesses, and cities made of sand, where Lorelei is a Doolivanti--a wish-maker--who can write her dreams into existence.
There's only one problem: the monster is a Doolivanti, too. What he wishes also comes true, and he's determined to shove Lorelei out, keep her family, and make the whole Wishing World his. To save them, Lorelei must find the courage to face him, or her next wish may be her last.

The Wishing World made me feel young and carefree again. It took my imagination to places it hasn't been in years. Ever page was a twist in the adventure and it didn't stop until the end.

Lorelei is bound and determined to find her family, and during her quest I found that the author was able to do a great job of keeping her young, but allowing her to grow up with each challenge that came her way. There wasn't a single moment that didn't shape Lorelei or seem out of place for her. It was very well written.

Another aspect that I enjoyed was that there was equal amounts of whimsy and danger. The battle of Good vs. Evil waged throughout the entire book and some of the characters that the author was able to develop really made me smile. Like the Griffin, the mouse, and even those god-awful flowers....you'll have to read to know what I'm talking about!

Overall this entire story was a fast-paced charming read for any age. It will take you places you've never been, and allowing you to take a break from reality...just for a moment.

My favorite holiday tradition is our Christmas Eve “Island of Misfit Toys” event. This will require a two-part explanation:

Part 1: There was an old stop-motion animation show back in the 1980s about Rudolf the Red-Nosed Reindeer. In one of these episodes, he visits the Island of Misfit Toys, a place where broken or weird toys band together to create a sense of belonging and strength with each other and rise above being cast-off by the world at large.

Part 2: In college, I spent most of my time with a group of friends who called themselves The Clan (like The Clan of the Cave Bear). What started as a hodge podge of friends who weren’t leaving the campus for the holidays turned into a ritual get-together. Nowadays I have my own family, but on Christmas Eve we invite anyone we know who doesn’t normally celebrate Christmas, doesn’t have family to spend Christmas with, or is away from family over the holidays. It is one of my favorite times of the year. I dislike that the holidays have become so much about buying and spending and gifts. This coming together of friends and family is, to me, the true essence of the holidays, and why I remain optimistic and happy about the holidays. 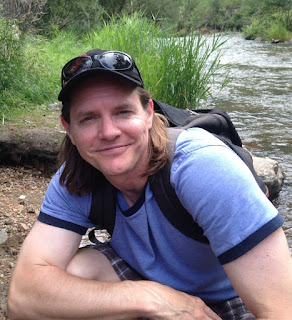 TODD FAHNESTOCK won the New York Public Library's Books for the Teen Age Award for one of his short stories, and is the author of the YA bestseller Fairmist as well as The Wishing World. Stories are his passion, but Todd's greatest accomplishment is his quirky, fun-loving family. The Wishing World began as a series of bedtime stories for his children.

- Skype or phone session (personal or school class).
- A bundle of Starscap Books.
- Two Signed Copies of The Wishing World by Todd Fahnestock.