Today I am excited to bring you, Dragon Craving, book #2 in Livia Olteano's Otherworld Summonings series. 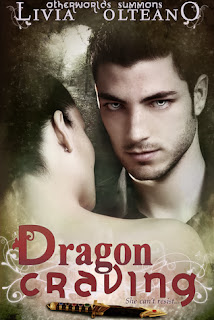 
Synopsis:
The world holds few secrets for Oracle Elana Anderson, or as her fans know her, Ela Deville. Successful author of paranormal romance, Ela, has a secret: not all her paranormal characters are quite that fictional. She hardly expected she’d trigger a chain of events that might bring about the end of the world via a pesky dragon. Rendered blind to visions of him, Ela’s only way to save her world is to keep the dragon close…very close.
Obitus, the only awake dragon in the Otherworlds, is determined to get back the magic that was stolen from him and secure his position for a good thousand years. Becoming Akai’s new guardian after getting rid of the current one is the best way to it. But that means getting Ela on his side. He’ll bargain and maneuver his way there if he has to, but ends up tormented by the desire to have her for real.
In a game of deals, half-truths and irresistible cravings, does one heart have to break in order for the other to save the world? 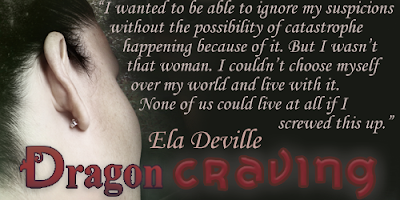 I wanted him to follow. At this point I knew he wanted a victim for tonight. If it wouldn’t be me, it would be some poor woman. I couldn’t let that happen. Once in the elevator I pushed for my suite’s floor. My pulse skipped. I’d wait for him there.

As the doors opened I stepped out of the elevator and inhaled deeply. He’d be up in about a minute. The hall was empty. I allowed myself a quick peak into the following minutes to make sure no one would show up beside the two of us. Allison would take about 45 minutes to come up. I had enough time.

I stood there, facing the elevator doors, and began the invocations. I had quite a few options as far as spirits went, but I rarely used them. Tonight, I called for the soul nippers. They were tiny, vicious things that hungered for soul energy. The most efficient way to make a living creature disappear. The nippers materialized out of the floor, screeching and moaning.


Now all I needed was a target to mark. And he’d arrive right…now. The doors binged open. He walked out, grinning at me.

“I knew you were sweet on me, honey,” he crooned.

I smiled and mentally drew the target symbol on his chest. The nippers launched at him. He opened his mouth, wanting to scream, but one of the nippers slid down his throat and blocked his vocal chords. They shot through him, screeching with glee. Each time they went through, a bit of his soul was consumed. In a minute or so he fell to the floor, eyes wide and face contorted in pain. I didn’t feel much pity. He’d put his victims though a lot worse.


Autopsy would show he’d died of a stroke. I took the phone out of my purse and hit speed dial. 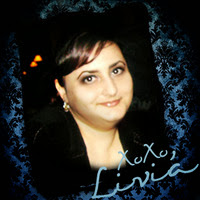 Livia Olteano is a loud and proud coffee addict, lover of all things beautiful and incurable romantic.

She believes stories are the best kind of magic there is. And life would be horrible without magic. Her hobbies include losing herself in the minds and souls of characters, giving up countless nights of sleep to get to know said characters, and trying to introduce them to the world. Sometimes they appreciate her efforts. The process would probably go quicker if they'd bring her a cup of coffee now and then when stopping by. Characters--what can you do, right?


Individual giveaways:
One ebook copy of both books in this series (Gargoyle Addiction and Dragon Craving)

Open internationally
Just comment below and tell me what kind of supernatural power you'd like to have!

Posted by Jessica Hansen at 6:16 AM