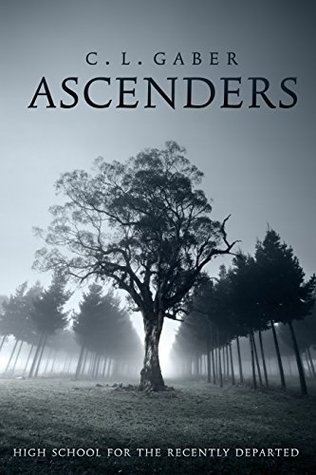 Walker Callaghan doesn't know what happened to her. One minute she was living her teenage life in suburban Chicago...and the next minute, she was in a strange place and in a brand new school with absolutely no homework, no rules, and no consequences.

She doesn't go to heaven or hell. She lands at The Academy, a middle realm where teenagers have one thing in common: They were the morning announcement at their high schools because they died young.

These high school kids are now caught in a strange “in-between” zone where life hasn’t changed very much. In fact, this special teen limbo looks a lot like life in a quaint Michigan town complete with jocks, popular girls and cliques. "There are even cheerleaders in death," Walker observes. It's not a coincidence that the music teacher is a guy named Kurt who "used to have this band." The drama teacher, Heath, is crush worthy because back in his life, he starred in some superhero movie.

Principal King explains the rules -- there are none. Why? You can't die twice.

There is no homework.
No tests.
No SATS.
You're just there to learn because the human brain isn't fully formed until you're 24.

By the way, you can't get hurt physically, so race your Harley off that hillside. But falling in love is the most dangerous thing you can do ...because no one knows how long you'll stay in this realm or what's next.

"Losing someone you love would be like dying twice," Walker says.

When you think about a high school for the dead, you would like to think that whoever is attending this school would know the following things:

1. They're dead
2. That their family has realized they're no long with them
3. Love is out the window, I mean they're dead right?!

....Well Ascenders blew those expectations away!

After starting this year off without a review I was pleased when I jumped right into Ascenders! It was well thought out, the plots intertwined gracefully, and I was sucked in by the characters. From Walker, to her odd teachers, to the stero-typically bad boy. Except these teachers, this girl and this bad boy, are dead....sort of....it's the in-between.

Walker is just trying to cope with being alive one second, and BAM next thing she knows she's living in this nice house that her mom can't afford the next, wondering where these antiques came from. The transition into Walker's "next life" was hard on her, but who wouldn't have a hard time coping with sort-of-being dead. Though while trying to cope she's able to meet some pretty awesome people. Including former actors, band members and that too cool bad boy.

Even with all these quirky characters, Walker was able to shine the star. The author was able to balance out her personality, her growth and never make her seem like an afterthought, which can be tricky when you have this much going on in one story. Walker's relationship with Daniel wasn't your normal teenage heartache. They're dealing with more than "the feels", Walker is trying to determine how to actually care about someone when you're dead.....it was heart-breaking at times, but everything truly happened for a reason.

This entire series should be quiet the ride, honestly I can't wait for book #2!

C.L. Gaber is the author of the ASCENDERS SAGA and co author of Jex Malone. A well known entertainment journalist, she lives in Nevada with her husband Ron, bonus daughter Sabrina and two unruly dogs. ASCENDERS 2 is due out in early 2016.


a Rafflecopter giveaway
Posted by Jessica Hansen at 4:00 AM