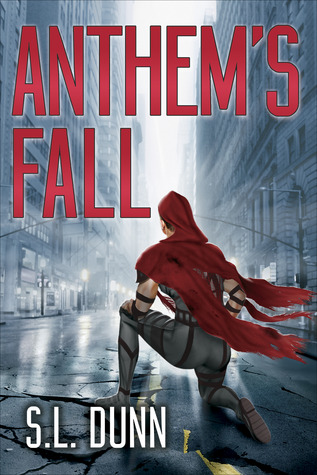 Above a horrified New York City, genetics and ethics collide as the fallen emperor and a banished exile of the same herculean race ignite into battle over the city’s rooftops. In the streets below, a brilliant young scientist has discovered a technology that can defeat them both, yet might be more terrible than either.
Set both in modern New York City and in the technologically sophisticated yet politically savage world of Anthem, Anthem’s Fall unfurls into a plot where larger than life characters born with the prowess of gods are pitted against the shrewd brilliance of a familiar and unlikely heroine.

Never would I have fathomed that such an in depth, complex book could suck me in like this.
Now don't get me wrong, there are a lot of books that I read with complexity, but Anthem's Fall had multiple worlds, genetics and more scientific terms then I care to shake a stick at. Funny thing is with all of these aspects the plot and story line remained clear....it just meshed.
Kristen is the first character you initially meet, kid genius who was recruited into this special "think tank" team who is working to generate a synthetic type cell. What struck me with Kristen is she spoke her mind, that is one of my favorite characteristics in books. Especially when it comes from a female. (Because honestly when guys do it I sometimes want to smack them.)
Throughout the book you eventually cross over into Anthem, where similar testing's are being done with synthetic cells. Without spoiling anything, let's just say things get ugly....and they get ugly fast. Issues escalate, death happens, and now Anthem's people are looking for answers.
One thing I loved about Anthem was the massive range of character types there were. It wasn't just all super heroes, the author really added a new horizon with some of these "mutants".
Overall I truly can't wait to see where the rest of this series goes, the way the book ended it leaves the author with a WIDE variety of options as to which way this series can go!
4/5

~~~~~~~~~~~~
This Or That
Food! (I love food)
Spicy or Savory
I like spice, but at the end of the day savory is a mainstay.
Sweet or Sour
Sweet.
Mexican or Chinese
Mexican. A thousand times over.
Burger or Mac N Cheese
I don’t eat meat, so Mac N Cheese. Don’t hold it against me.
Hot Dog or Corn Dog
Soy-dog. Ugh. It absolutely is as bad as it sounds, don’t listen to your vegetarian friends.
1 Year eating only Cereal or 1 Year eating only Bacon
Cereal. Cereal is strangely good considering the production value. Honey Bunches of Oats with Almonds for the win.
Homemade cookies or Homemade cupcakes
Oh man, this one’s hard. Have to go with cookies.
Ice cream or Popsicles
You crazy?? Ice cream.
Fresh from the garden tomatoes or Fresh from the garden cucumbers? (If you hate vegetables we can not be friends anymore)
Cucumbers, the most underrated vegetable in the patch. On an unrelated side note, cucumber infused vodka is a libation of the gods.
Going without meat or going without carbs
This one’s easy since I don’t eat meat anyway.
Traveling the world as a food critic or instantly becoming the worlds greatest chef
World’s greatest chef. This goes back to the old “give a man a fish or teach a man to fish” scenario, right?
Posted by Jessica Hansen at 3:00 AM

Email ThisBlogThis!Share to TwitterShare to FacebookShare to Pinterest
Labels: Anthem's Fall, Book Nerd Tours, Review, S.L. Dunn, This or That