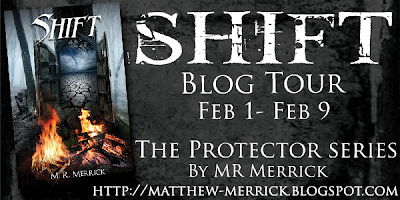 Posted by Jessica Hansen at 9:44 AM

Not yet but is definitely on my TBR SOON pile! Everyone raves about it on twitter ;) can't wait to get into this series!
Tess
tessmw.blogspot.com

Chase I gotta tell ya I agree Pep and Bacon Pizza pop ROCK!! I can't wait to read more on Chase and Rayna!!

BTW...you are one the reasons I actually purchased the first book! I should be getting it any day in the mail. ;-)

I haven't yet, but I just won a copy. Can't wait to start it! I've been hooked by the excerpts :)

No, but I bought it a few days ago and I can't wait to start

I haven't read Exiled yet but I did just buy a copy from Amazon and it's loaded on my Kindle! I'm going to be reading it next and I can't wait!! It would be awesome if I won a copy of Shift so I could read both of them together :) Thanks so much for the giveaway!

I've not read exiled, Mr. Merrick is a new author to me. Really glad I found you so I could be introduced to his work though. So thank you for that :). So on my TBR.

No I haven't read Exiled yet. Would like to just haven't.